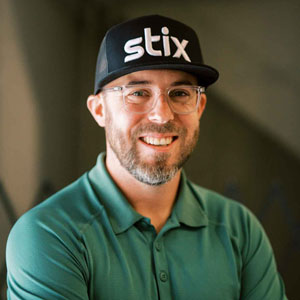 As CEO, Gabe gets the right people on the right things — and keeps his focus by listening to customers like you.

“It’s important that I don’t lose touch. So, on Mondays I go through every piece of Stix customer feedback.

I need to hear from the source, so feedback affects change at the top. Product, process, hiring, pricing, policy… it’s all informed by the customer.”

What’s your background with golf, pre-Stix?

“My story is the Stix story. After 20 years, I needed a new set and didn’t like the options.

But the backstory is that I bought my first set of clubs at a church rummage sale for $20 when I was 10 years old. It was a hodgepodge of clubs in a crusty old leather bag. Rusty. Wooden. None matched.

But I played with my janky old set and good friends for years. Always at cheap municipal courses.

For 20 years, I rocked those clubs. It was casual, infrequent, two to five rounds a year. I had four kids and a career, so there wasn’t time to golf and no good reason to upgrade.

But then my kids got older. So, I started to play more often with my son and my friends. It was time for a new set. I didn’t want to settle, but even so, spending thousands on clubs wasn’t on the table.

And that’s how Stix was born.

Stix is for golfers like me. People who are past getting a cheap starter set but aren’t sold on an overpriced brand, either.

I care about design, about quality. But I’ve never been convinced by the hype that this year’s tech will be a game changer when I'm still battling just to stay in bounds.”

“Always municipal. Jackson in Seattle was the first.

Dawn patrol at Seattle Wayne Golf Course ($15 for nine holes). The joke was that you could lose a hole in the fairway, it was that muddy.

“Green Lake Club. I’d have rounds that were two or three under par there. The longest hole was 140 yards.”

“I once got an eagle. It was incredible. Par four and I drove the green, which was insane — let’s call it 270. Eight foot putt but I sunk it.”

“I’ve always loved the 60 degree wedge. Before this weekend, though, my favorite was the five iron. I tee off with it every time and consistently improve my game. This past weekend, it was the hybrid. And I love the thick grip of the putter.”

How did your career path lead to founding Stix?

Before Stix, I was a partner at a venture studio. We’d validate innovative products and companies. So, I learned how to build brands, products, and find product-market fit.

All of that culminates at Stix. And the network I built along the way — those people are here, too. We’re a group of friends who love working together.”

How did you validate Stix?

“Initially, the idea for Stix was to offer a higher degree of customization. That seemed like something different, something cool.

In the first validation test we offered clubs in a full range of colors.

Across hundreds of responses, without exception, they chose black on black clubs. So we said, ‘screw customization’.”

What lights you up about leading Stix?

“We’re not changing the world, but Stix is making the game more accessible through design and price.

I love hearing stories of people finally upgrading after using clubs they’ve had for a decade or two — rummage sale clubs.

With great clubs under $1k, they’re gaining confidence, enjoying the game, the pure joy of being out there on the course.”

What do you hope for the future of golf?

“We’re already seeing progress in breaking down the barriers of an overpriced, elitist, performance marketing sport.

And that needed to happen. It still needs to happen, so new golfers and casual golfers feel more welcome.

There’s a 50/50 divide between those who play on course and those who never step foot on one. We want to see off-course golfers transition to on-course.

No more dress codes. Reasonable prices. Opportunities to play just three holes at a time because most people can’t spend $100 and their entire day on a game of golf.

It doesn’t have to be such an intense investment to be a ton of fun.”